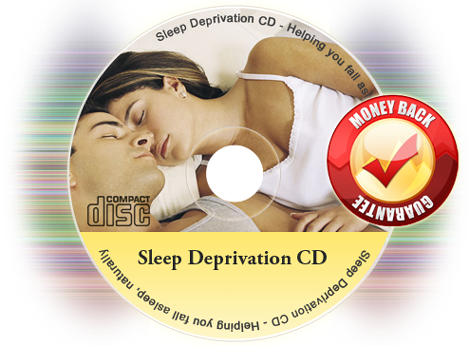 Have you suffered from those endless nights of staring at the ceiling? You're frustrated... nothing is happening... you thought you COULD get to sleep, but you just can't. It's SERIOUS. We may have an alternative!

You're at the right site. Try the Sleep Deprivation Audio Program for 90 Days... If you are not satisfied your money will be returned. NO QUESTIONS ASKED!

Is Sleep Deprivation Making You MISERABLE? Amazingly a SHOCKING 25% Of People Suffer From It.

Learn About A Powerful Discovery Made By A German Research Scientist In 1839 - H.W. Dove And The Science Behind It!

Have you suffered from those endless nights of staring at the ceiling? You're frustrated... nothing is happening... you thought you COULD get to sleep, but you just can't. It's SERIOUS. You shuffle about... you watch TV... you read a book... but NOTHING helps.

You're simply SETTING YOURSELF UP for a MISERABLE day tomorrow.

And the worst part is that this happens AGAIN and AGAIN... to 25% of the nation, in varying degrees... and there seems to be absolutely NO escape for many people!

I personally suffered from sleep deprivation and insomnia for over FIVE SOLID YEARS. Imagine that. Five years of feeling tired, feeling awful... five years of WAITING to fall asleep. I visited my doctor and he suggested a handful of treatments.

NOTHING WORKED. Traditional methods FAILED me, The Pills Made Me Feel Worse.

At the same time, I began working on the development of a new audio therapy course. And I discovered something that literally changed my life... it HELPED my insomnia!

Here's How I Stumbled Upon The Discovery From 1839
And How It Made a BIG Difference In My Life!

I've been a little slack so far. I haven't really introduced myself.

My name is Bradley Thompson and I'm a self-development author. I wrote the books "Developing Your Own Subliminal-Studio" and "Lucid Dreaming in Seven Days", among others. I invented the famed 4-part Encoding System(tm) currently used in thousands of Subliminal-Audio CDs.

And along the way I discovered something that seemed to help many people.

Five years ago, I spent much of my time researching sounds and the effects they have on the mind. And I discovered the world of "binaural beats." These are special tones that can influence the mind...

... And they're the KEY to helping my insomnia and sleep deprivation!

Today, I'm considered a leading expert on binaural beats by many. In fact, I was recently commissioned to oversee the entire series of CDs now offered at Binaural-Beats.com (you'll find my name at the bottom of every page on their site).

And during all my research, I discovered something EXTREMELY interesting...

(If you don't want the technical details, skip straight to the NEXT SECTION)

As you may already know, the brain operates at certain frequencies. Those frequencies determine your current state of mind, such as being wide awake and alert, or being in a state of deep relaxation.

For example, when your brainwaves are operating at between 8 and 12Hz, you're in a state of "relaxed awareness" - something scientists call the Alpha state.

... What if you could RECORD that noise frequency of 8 to 12Hz and play it back to your mind? Your brainwaves would alter to match the frequency and the sound would RECREATE that exact state of "relaxed awareness."

HOWEVER, your ears can only hear between 20 and 20,000Hz. So there's no way you can play back lower frequencies and have a direct influence on your brainwaves.

BUT here's the exciting bit!

Back in 1839, a German scientist called H.W. Dove discovered a way of allowing the brain to hear those low frequencies. He played a tone of (say) 400Hz into one ear, and 410Hz into the other ear.

What happened was that a third beat was generate INSIDE the mind, consisting of the difference between the two tones. So, in this case, the listener began experiencing the 10Hz frequency... called the "binaural beat"... which in turn induced a state of relaxed awareness.

Back in 1999 I used this EXACT technique of generating binaural beats to aid my sleepless nights. I developed my own cassette tape recording and listened to it at night. It took me straight down into a deep state of relaxation, then off to sleep in minutes. My insomnia and sleeplessness VANISHED. I simply listened to the recording and fell asleep. There was NO waiting... NO shuffling... NO tired mornings... NO tiredness.

I was ALIVE again... and truly AMAZED!

After Many Years Of Research And Testing, We Believe We've Created A Perfected Audio Program That Will Astonish You!

I want you to know that I am EXTREMELY EXCITED!

I spent three months last year working in Melbourne, Australia, with our chief audio technician and we've produced an up-to-date, music-backed version based on our years of research and testing and... All you have to do is LISTEN!

The audio recording begins at 14Hz and goes down to an amazingly relaxing 0.9Hz.

It has been strategically designed using all the latest scientific research. If you decide to give it a try and are not 100% satisfied, you won't pay ONE PENNY!

The many years of hard work and research are now complete and has basically paid for itself over the years so... we've decided to slash the cost to just $34.95 to cover our basic production & shipping expenses.

This is an amazing opportunity and offer you must take advantage of! Here is exactly what you will receive…

REMEMBER... YOU WON'T FIND THIS ANYWHERE ELSE.

You WON'T find anything like this at your local pharmacy. You WON'T find it on eBay. You WON'T find it anywhere else online. People usually don't INVEST in insomnia because it's not a very profitable industry (except for maybe big pharma) and most things just don't seem to work for many people. I have a vested interested... I used to be a sufferer.

But I'm NOT a sufferer any more... and I really hope you decide to make a move and try it for yourself!

Ready to get started? I promise you'll be AMAZED...

IMPORTANT NOTE: Do NOT use if you suffer from epilepsy or any serious mental disorder. For a full health disclaimer, please click here. This website and product has not been evaluated by the Food and Drug Administration (FDA).

Here's just a sampling of some of the feedback we received during May 2011. Remember, every single testimonial is wholly unsolicited:

"You've done a fantastic job. I can't believe how much this has helped me. I'm going to sleep on time, every night. I'm waking up more alive and alert and feel so much more productive. Thanks!!"

"I don't know where to begin to thank you for the sleep program. I've had fibromyalgia for twenty years. Yet after just the first night, I managed to sleep soundly and get up feeling refreshed for the first time in the past twenty years! My 16-year old son has me as a new mum and has only ever known me with my FM. Now it's all changed -- every morning I'm waking up with enough energy to be able to do everything and more! I'm no longer having to go back to bed with fatigue. It's fantastic!!! I think your program is amazing and I know it can help thousands of people who have sleep problems!"

"What a great program. I've suffered from insomnia all my life. This program relaxed me completely within about three minutes of listening to it. Not like usual crappy 'relax CDs'. This is the best buy I've made all year."

"I read your site about the man that suffered sleep deprivation, and discovered how this program works and which 'Hz' numbers did what. A bit technical, but I couldn't believe my luck. Didn't want to go on to sleeping tablets and these programs are a great way to enhance sleep. Nights can be so lonely and frightening when you don't sleep. All the nervousness that I suffered from lack of sleep seems to have disappeared. I live in North London, you have my details on file. Please use this as a testimonial! If you need more information, just get in touch!"

"... I have spent literally $15,000 on specialists, the Mayo clinic and hospitals over the years. I haven't spent a whole and full nighs sleep since birth. Imagine my surprise when after the first night it worked! I'm now telling everyone so much they assume I'm involved in a direct marketing scheme. You deserve to be millionaires!"

"Thanks for the program. As a long term sleep deprivation sufferer, I can honestly say your product is nothing short of miraculous. The mixture of music and tones are so relaxing. I don't know what you put into this program, but it WORKS. I'm recommending it to all of my friends. Thank you so much, you've made this man very happy!"

"This isn't a question, it's a story, please publish it. I setup my own recruitment business six years ago in Augusta and have had major sleep problems since then. My relationship has suffered too because I'm unable to spend a single night quietly resting. And that's really affected my moods too. I was on the verge of a breakdown and needed something to change, quickly. It did -- with your Sleep Deprivation program. I want to recommend it to anyone who might be reading this. Contact me if you have questions, I now have more time and live a much happier life! What else can I say to express it? Thank you. Thank you. My life has changed around completely, A+++++++"

"I used to view sleep as a waste of time (and used psychotherapy to treat that attitude). With your program, it was as though I simply stopped worrying and allowed myself to fall asleep. I absolutely can't believe the difference. I couldn't ask for anything else."

"Excellent! I can't believe I never heard of this. As soon as the press hear about this, you'll be famous overnight!!!"